Still need a little work on where the keypad sits before I'm 100% happy but for the average joe they are ready I suppose. Just need to make molds of a few more greebles, ESB flamethrower, and the rocket.

Slowly making more progress. I've pretty much got a 'good for the average person' sculpt however I know I can do better.

Sizing
I sent an early test pull to @boba87fett and he compared them in size to some FP gauntlets he had. This should give folks a good idea of how big they are since I'd say most everyone knows FP gauntlets. 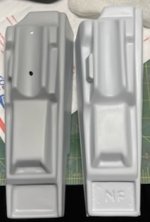 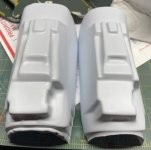 Left Gauntlet
The left gauntlet sculpt is going to end up just being ESB. I've got another mold for ROTJ from 7CS that I haven't even started looking at. That will of course be fiberglass for those interested. Overall I'm happy with how it is turning out. I've since adjusted the angle of the flamethrower side to make it more angled and extended the sculpt down some to give it the extra lip as seen in ESB. 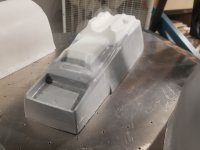 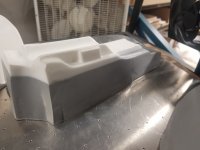 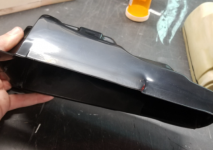 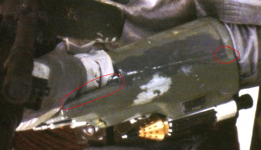 Right Gauntlet
The right gauntlet still needs a bit of work. The biggest change on the menu is to smooth out the back to be more cylindrical and shave down the sides a bit to make it more narrow.

Steven pointed out that the black bump on the top should be a trapezoid, not a rectangle, for non-ROTJ gauntlets. Such an odd thing to change in the molds, curious why and how. I spent a few hours combing over reference material and tried to make sense of it.

(Preface: I'm sure there has already been tons of research into things like this, and I could be making the wrong connections, this is just how it all connected in my head so correct me if I'm wrong).

The bucks that Art Andrews has over at TDH clearly show a trapezoid shape on the top. ST/PP1-3/ESB gauntlets appear trapezoidal.
The ROTJ gauntlets, mostly, do not. They appear rectangular. However I'm wondering if it could be a trick of the paint? Hear me out. 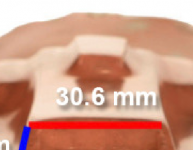 Here we have all the surviving right gauntlets as they appeared at the time of taking that picture.
To me, all of those tops look like they could be trapezoidal. The difference is the crispness of the black paint lines and where they are.

Note that #3 was PP2 and the unnumbered one at the bottom next to PP2 flamethrower is PP1 and/or PP3.
Assuming these are all the gauntlets that were ever used it would make sense to me that #3 is PP2 and ESB. 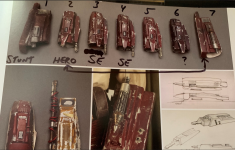 Let's take the #4 gauntlet for example. To me it appears the most rectangular but if you look at the paint lines it isn't painted evenly down the side. The front is painted further down than the back which, when looking from above, could make a trapezoid look rectangular. 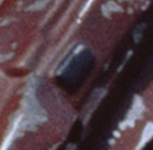 Now then, what about gauntlets where they are obviously trapezoidal? Well, they appear more evenly painted all around.
Take a look at PP1 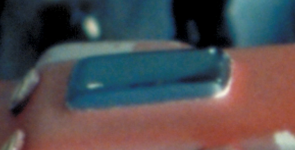 ESB, which I think Art's buck has lineage to? 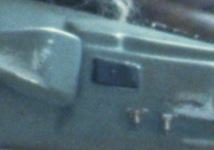 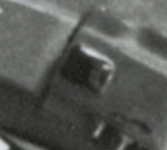 Then we go to #3. In the back the black paint stops near the top, in the front the black goes down much further. Couple this with the lax slope as seen in Art's bucks and I think you can visualize what I'm talking about. From above, you could make it look rectangular or trapezoidal depending on where you draw the lines down the sides.
Additionally, if PP2 is ESB then that means this gauntlet is ESB and as seen above, ESB does appear more trapezoidal. 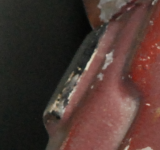 Anyway, that's my attempt at putting my thought process in a post. Hopefully I made sense.

My conclusion is either way I need to make one that is trapezoidal however I believe they could all be trapezoidal, it's just the paint lines change how it appears from the top. After I make changes to my sculpts I'll do some paint tests to challenge my theory.

Hey mate! Any updates on these ?