Staff member
You can still see the original over at mykindascum, link below, but I said I would move it over, which has now happened. It's the same article, with the exception of a change to the last passage, in order to omit swearing, and to make it in line with the board's swearing policy. Aesthetically, it's a little better in the original format, but it's preferable to have it over here than for people to have to follow a link to another site.

There are lots of people who contributed to this research, and in a variety of ways, but particular thanks goes to Singleseat, Damian Woelfel @DWoelf , Lee Hurley, Shawn Morgan, Ryan Day, Robert Pareso @Major , and, of course, Lee Malone.

You can find the article in posts 58 and 59. It was too big to edit this first post to fit in.

intwenothor said:
I did this over at MyKindaScum because it was easier to play around with over there than here. Let me know what you think. Observations welcome, and then I can alter it to move it over here.

Esb is cool and all… but how about a list for rotj?

absolutely outstanding. thanks Andy! Particularly for the insights on RR/R/11.

To make things infinitely more complicated, maybe there was deliberate color mixing going on. I think that happened on the armor colors.

Are there precise date ranges for the different bottle shapes?

Love the info! Thanks Andy!

Staff member
Absolutely outstanding work. Motivated me to scan and upload more of my Floquil documents to the media gallery.

Minute said:
Esb is cool and all… but how about a list for rotj?

Sure, the 'US medium green' always spoken of would be AN612 Medium Green, which is Floquil M182.

You mean the main green of the helmet?

Staff member
No. For the armour.

These are not the droids I was looking for...
M

intwenothor said:
No. For the armour.
Click to expand...

How about the green for the rotj dome? Any floquil research done on that?

@boba87fett did a test on all the ArchiveX (as being equal to Floquil?) colours. Any thoughts on this?

Staff member
I'm not quite sure what you're asking and what you are referring to. Can you clarify?

With the test swatches made by boba87 with the AX paints someone could make an AX RotJ helmet list, which could be paired to a Floquil paint list.

Staff member
I'm still not sure I understand what it is you're asking.

A Floquil RotJ helmet list. Wasn't it painted with Floquil too?

Staff member
Right. Gotcha. I thought you were asking me something about Archive X paints.

My post at Mykindascum was about Floquil and the Rogue Studios list - The Lee Malone ESB helmet list. ESB is is my focus, which is why I was exploring those colours. And, let's not forget, I'm simply expanding on a list that Malone gave us many years ago. There's a reason that thread has been viewed over 120000 times over at TDH.

Anyway, clearly what you are asking is what is the ROTJ list in Floquil, and whether this has been researched. The answer is that these colours have been researched, but not by me in any great depth - not my information to share. The people who have done the heavy lifting on that would share the information if they wanted to. I certainly have some general observations about what I have seen used, but it's not my place to publish what the ROTJ Floquil experts have come up with. Like I said, there are guys out there who have forgotten more about this stuff than I will ever know.

Per my post, here is an enormous piece of the puzzle. This is your palette. These are the colours you should be looking at. Even this is something that took a long time to resolve. There's still some wiggle room here, because older colours would still have been lingering around, but this is the late 70s Floquil list. The Boba helmets were painted in the late 70s - Steven's book will give you the exact dates. 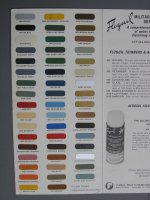 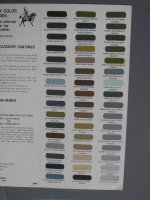 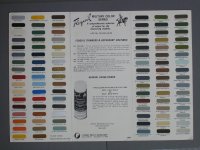 The RR list is a scan from the late 70 tri fold that I own a couple of. The military sheet I do not own. By hook or by crook, I have managed to get a sample or some of the actual paint of most of the stuff from the military sheet, but I don't have a copy of this sheet to scan.

So, main dome green. It's a green, and it is in the above list. If it is not in this list, then it isn't the right colour. I do appreciate that you've got all sort of misting going on with the Jedi and PP2 helmets.

There are between 25 and 30 greens on those sheets, but you can discount loads of them straight off the bat, e.g. main helmet green is clearly not R47 Jade Green. I appreciate that is an obvious one, but it won't take long to whittle down to a handful of colours just based on these sheets alone. Sure, after that you're going to have to buy some paint, or acquire some samples, but you're talking about known possibilities. In fairness, that's where the challenge begins, but that was a key point of my entire post; think about it - how often does anyone buy fifteen different printings of the same book?

I have some general observations: I often see CNW Green for the main green of the back panels. This is a nice colour, but as far as I know, this colour was not produced until after the helmet was painted, i.e. it cannot be Chicago & Northwestern green.

Another thing that never makes any sense to me - a lot of people paint the upper cheeks black. They are clearly blue. I never understand that.

Mandible red - how many options are we looking at? It's two or three maximum.

Amazing! I don't know where I read it, probably TDH long time ago o Chris (Singleseat) on TMPPC, but it was said the red was the same as the ESB red.
You must log in or register to reply here.
Share:
Facebook WhatsApp Email Share Link
Top